From our hands to yours

Everything began back in May 2008 during a stay specialized for young autists organised by the association Le Silence des Justes. A wood workshop is going to open such amazing prospects. Indeed, the seed was planted. That is why twelve years later plus a new cooperation with the Ecole du Breuil, our Artbooster workshop is bearing its first fruits.

Let’s flashback to spring 2008. From the 1st to the 20th May young autists were on vacations in the mountains, and was for them the opportunity to do a one-week training course. The goal was to restore a ping-pong table.

Our budding carpenters called David, Samuel, Jérémy and Malkiel worked on this table for a week, under the guidance of a project director and their educators. They were going to unveil huge resources and capacity of concentration. Stéphane Benhamou (founder of Le Silence des Justes) remembers: “Saying that I was surprised is an euphemism! They look to have more knowledge than any others. I was amazed by their dexterity and their focus. I was stupefied to observe the impact it had on them: the serenity and the satisfaction of having done a good job.  This was not medical, but it was in fact a real treatment.” 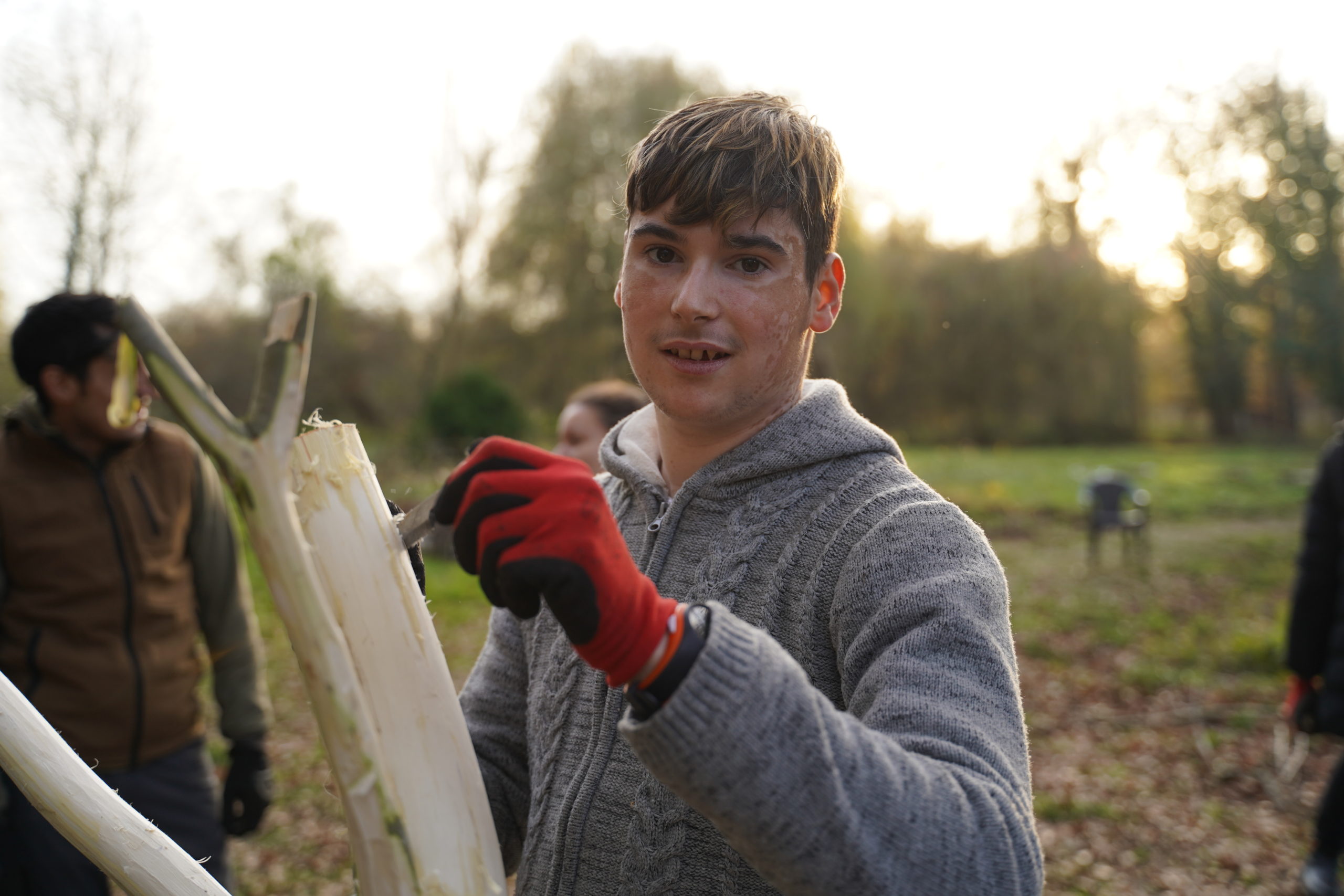 Some tools, but not only instructive

Thus, they have been initiated into multiple carpenter’s techniques such as cutting, sanding, painting, nailing, puttying or sticking and so to the use of the corresponding tools too. They were involved in a tour of the city in an instructive and socialize way. They first visited a sawmill in order to grasp the transition between trunk and plank, then they visited a hardware store to buy some materials such as paint. They comprehended notions of machining, tidying, money, anticipation and organisation in time and space. They finally learnt how to identify and master how to work with wood. The adventure was only beginning!

In spring 2009 florished a beautiful partnership between Le Silence des Justes and the Ecole Du Breuil. Du Breuil is the Parisian school of horticulture, one of the most famous and oldest in the world. This friendship gave birth to the project “Make mint grow in order to cultivate friendships” which consists in the plantation and the care of 30 variety of mint, the creation of a vegetable garden and many enriching interactions until 2012. Another seed was planted.

Once upon a time…

In 2014 Etienne joined the team with a work group about natural discovery. Etienne is a formator educator and he did not know those young teenagers and their autism spectrum at that time, he had no clue of what they had already done. Little by little he focused on the creative spirit of the association and the idea of Artbooster was born. They began learning to know each other and readapting the work group. They were able to produce small objects and small tasks for example huts, fire tables and rods…

“We choose to spend good times”, remembers Etienne. “Also, we did what they wanted. Some of them wished to discover plants, so we examined dangerous species: bramble, stinging nettle, digitalis… Because they wanted to play with everything, the educators needed to know all of this.

Not to go round and round in circles

Gradually, he realized that they could work together on small wooden objects. The first challenge  was Moise an autistic boy, who kept going in circles and was complicated to keep in line. Etienne decided to make an object that looks like him: spinning tops. “Was it good or bad, I don’t really know. I agreed with his stereotypy.” Then not to restrain himself in this facility, Etienne widened his point of view. He incorporated educators, families, institutions and daily life. The kids began to offer gift for Mother’s Day, for birthdays of brothers and sisters… While gifts became more technical and more creative everybody got accustomed to it.

Giving a soul to objects

To counterbalance our lack of productivity, we offer quality which consist of human values and high quality / noble resources. Each object has a history. We are looking for authenticity. Giving a soul to these objects and to the work we create. From the tree to the object: that is our belief, our DNA. We go outside, we notice a tree, we cut it down (replant 5 others) and we observe it. We ask Lotfi “what do you see?” He exclaims “A plane!”. Sometimes we have no idea at all, so we leave it out for a while. We work as artists; we have the raw material and we wait for the idea to come up.

Every Monday and Thursday, our creators come to make things we have prepared before in Sacy Le Grand, where there are the vegetable garden and woods.

Making it with what we have and making it together

Our catalogue is going to evolve in function of you. We now master several techniques (as you can see on the video behind) and more capacity to create beautiful art. Our philosophy is to be local, fair and eco-friendly. That is why we make with what we have and often work with second hand materials.

From Jackson to Chirac

Loïc was at first fascinated by trains, and he kept drawing it full size on a log. When Etienne saw him dancing like Michael Jackson he asked “If you ever draw Michael Jackson?”. Loïc took his best marker and few minutes later a magnificent and rough M.Jackson was created; Loïc immediately scribbled on it. It took a while for him to recognize that his piece of work was appreciated.

In a complete autonomy, Loïc borrowed the phone of an educator, looked at a picture of M Jackson and here it goes. To motivate him to draw something new, Etienne asked him who died recently, tit for tat he replied “Jacques Chirac!” Now he draws faces of Chirac, Charlie Chaplin… It is going to be a real Pantheon! In the shop he has his own display unit with all his portraits. And we can see that his aesthetic gains in maturity and creativity.

Our artists, your shop

This shop is for you, what do you like the most? Do not hesitate to contact us and to visit us. It is a cross between art and handicraft. We are going to find our path together. We have some exceptional creators and we hope their invention will evoke you!

This shop is bound to evolve according to the talents of its artists, but also to your tastes. Please do not hesitate to contact us and come see us. To encourage us, exchange ideas and appreciate our creations. We are halfway between art and craft. And it is with you that we will find our way.

By keeping browsing our website, you accept our use of cookies. We use them for audience measurement & to improve your browsing experience.